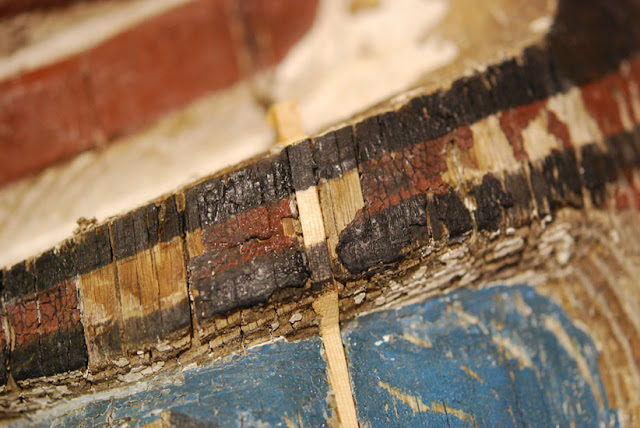 Repairing a piece, like the Chief's Crest Pole, is not as simple as re-painting it.  The first step is to clean out all of the dirt and debris from the cracks and crevasse   The second step, the one Andrew is facing now, is all about filling in the holes and cracks that appear once the Pole has been cleaned up.  This is where Andrew's skills as a woodcarver come into play. 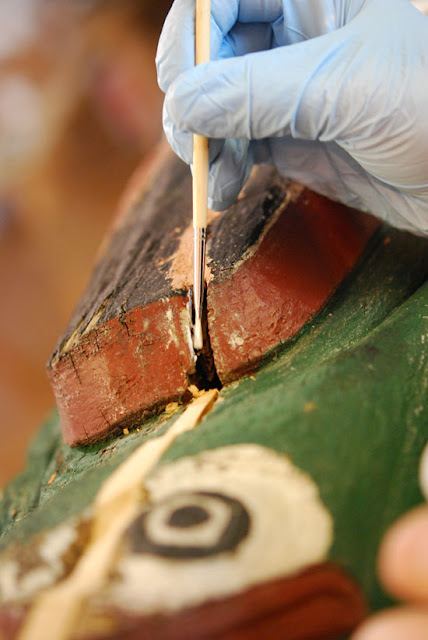 After the cracks are free of any loose debris, Andrew pants on a thin layer of glue.  The glue is an acid free, PH balanced glue specially designed for restoration work. 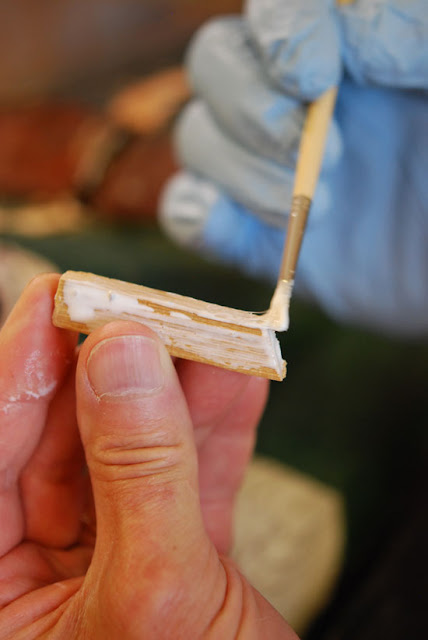 He also applies a thin layer to a sliver of wood.  These slivers are cut from pieces that Andrew had flown in from Canada especially for this project.  The idea is to keep the wood as close to the original as possible and that even means collecting it from the same region that the Chief's Crest Pole was made. 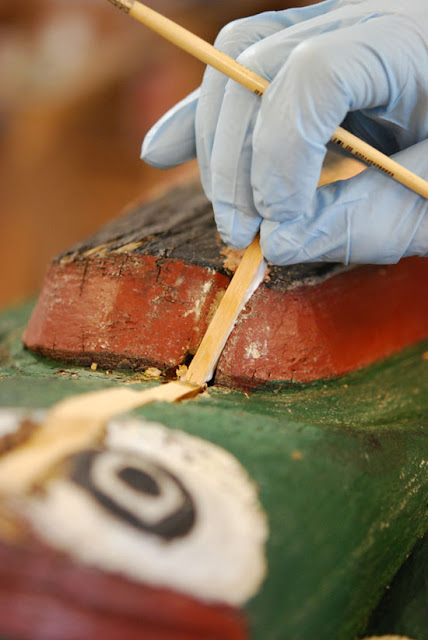 Once the two pieces are covered in glue, Andrew carefully holds it in place until the glue sets. 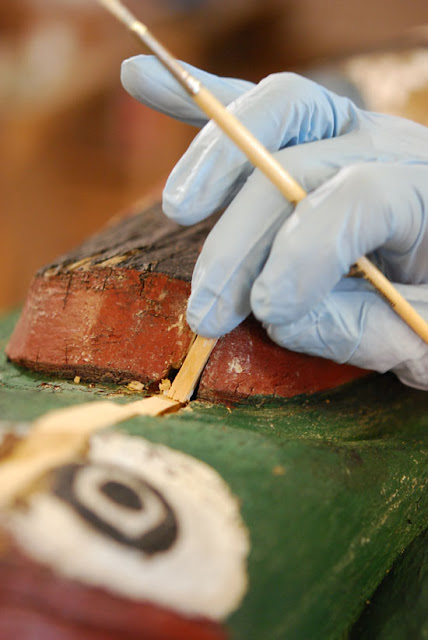 At this point the wooden sliver can sit in place without falling out, but it is far from being ready for the next step.  For that, the glue must dry overnight. 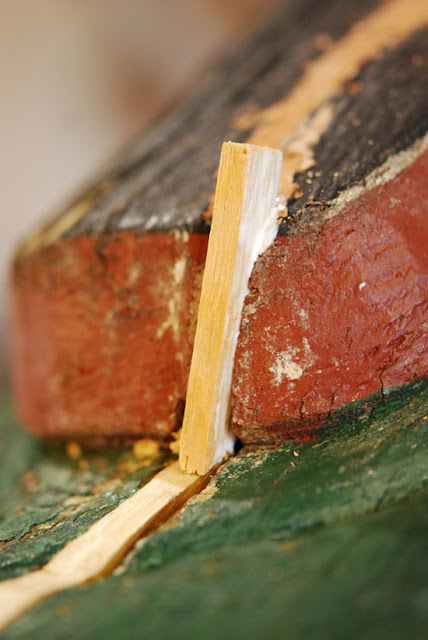 Once the glue is totally dry, the next step is to carve this sliver down to match the area around it. 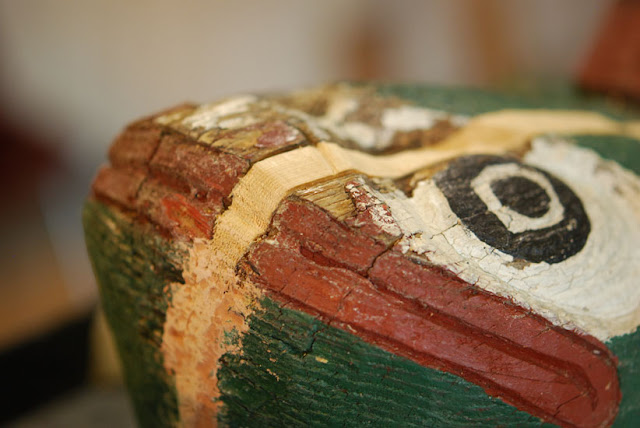 Here's a wonderful example of an area where Andrew as already carved his slivers down.  Not only has Andrew followed the contour of the frogs face, but he's also made sure to carve in the small details, like the frogs nose, into his replacement slivers.  This process is very detailed work, and with the dozens of cracks in the Pole, Andrew must work with great patience to make sure that all of the details remain in the Chief's Crest Pole. 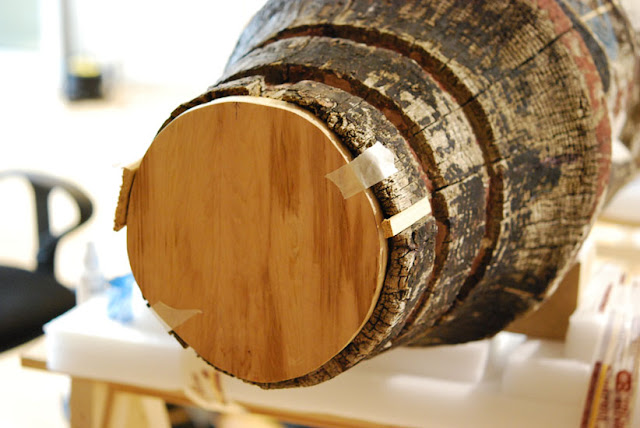 While many of the cracks are small and narrow, there are also some larger areas of damage on the Pole as well.  Most notably are the base and top.  Andrew has already started to work out how he plans to fix these areas, including this new top that he's started to work on. 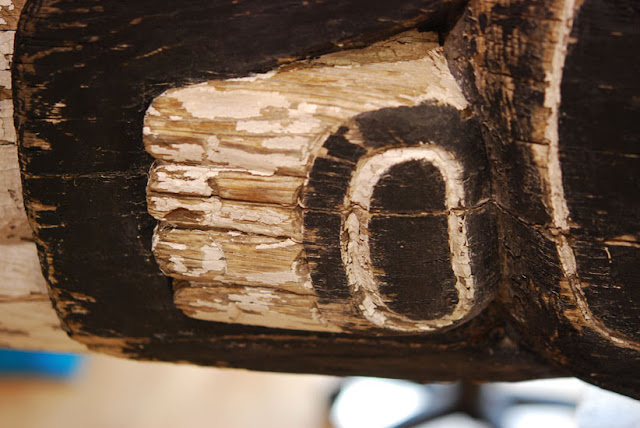 While working on repairing the cracks and crevasses Andrew has also started to experiment with colour.  There are many areas of the Pole that won't require any crack repairs, but will need a great deal of paint repair.  The goal of restoring this piece is to try to keep as much of the original colour as possible, and only re-paint when necessary   It's also important that where the Pole is re-painted that the colours match perfectly.  As you can see by the photo above the paint is chipped a great deal in some portions of the Pole. 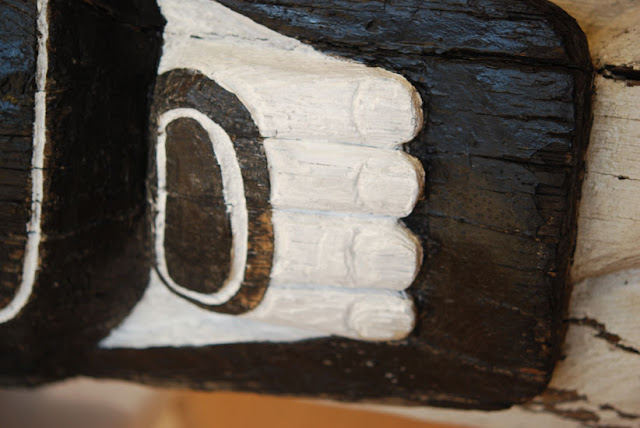 Andrew has already started to re-paint some areas, and the results are fantastic and bright.  With just a little bit of paint, portions of the Chief's Crest Pole are really coming back to life.
Posted by Chris Stewart at 12:00 PM